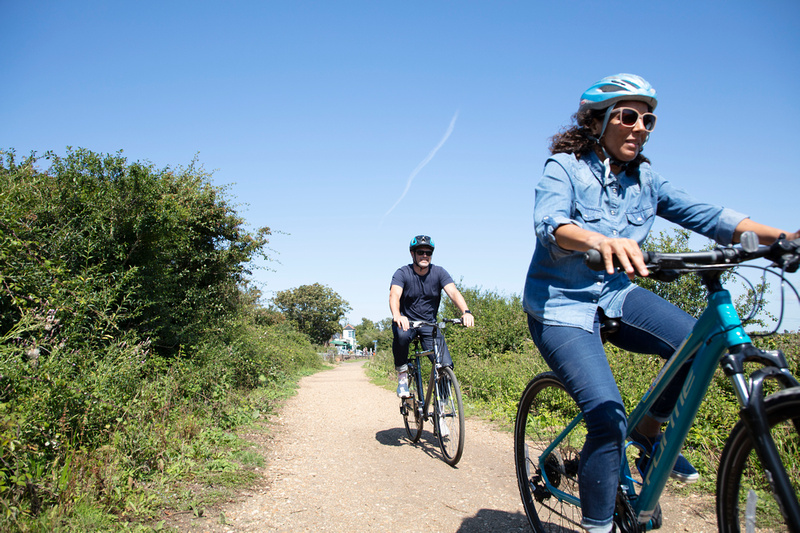 Yarmouth, located on the west side of the Isle of Wight, is a great base from which to start your cycling adventure this autumn.

Wight Cycle Hire have been lending bikes since 2005, so they certainly know a thing or two about cycling on the Island. The team are enthusiastic cyclists themselves, so they know all the local routes and the best places to go. Based in a restored railway station in Yarmouth, they’re just a few minutes from our port, so you can jump on at Lymington with your car or on foot and be cycling in no time.

Before you set off (or when you return), make sure you pop into Off The Rails restaurant, based in the same station. Not only can you enjoy fantastic, locally sourced food and drink, the restaurant overlooks the outstanding natural beauty of the Yarmouth Marshes and Mill Copse too.

A simple ride from the hire base takes you to Fort Victoria and its country park – a former military fort built by Lord Palmerston during Queen Victoria’s reign to protect the Island from French invasion. It’s a great place to explore and has amazing views over The Solent to Hurst Point.  On the way you’ll take in Yarmouth – the smallest seaside town in the country. Walk along the UK’s longest wooden pier, visit Yarmouth Castle and wander around the small boutique shops.

The ‘In Search of Jimi’ trail in West Wight is an inland route taking in Yarmouth and Freshwater, with the opportunity to stop at Freshwater Bay – one of the most scenic viewpoints on the Island. Along the way you’ll visit Dimbola Lodge and the iconic Jimi Hendrix statue. You’ll cycle alongside the River Yar and enjoy countryside views too.

For those with young families or inexperienced on a bike, local cycling expert and blogger Tim Wiggins suggests following the disused railway line alongside the Western Yar River through to Freshwater. This is a traffic-free and shaded route. Look out for the wildlife and enjoy the views. When you arrive in Freshwater, the End of the Line Café is an ideal stopping point for an ice cream or coffee, before getting back in the saddle for the second half of the ride. The route back to Yarmouth uses a quiet lane that takes you through to Thorley, before re-joining the disused railway line for the last section back to Yarmouth.

Confident cyclists can reach the icon Needles rock formation from Wight Cycle Hire’s base (the route is undulating and involves riding on country lanes which can be busy at times). Spend some time at The Needles Landmark Attraction, taking the chairlift down to Alum Bay with its multi-coloured sand cliffs and stunning views across to the famous rocks and lighthouse. On your way back, make sure you stop at The Piano Café – once owned by Queen Victoria’s Piano tuner and supplier – for coffee, cake or a mezze-style lunch.

Feeling energetic? There’s a route that takes you around the whole Island, if you’re up for the challenge! The Round the Island cycle route is enjoyed by many experienced cyclists but it’s easy to split into smaller routes for those who want to try just a section. You can tailor the ride to your preferred difficulty level too but bear in mind that it’s a hilly island – so be prepared to work hard!  The route is signposted with blue and white signs. Blue signs with the white island shape guide you anti-clockwise, and white signs with a blue island shape take you clockwise around the Island.