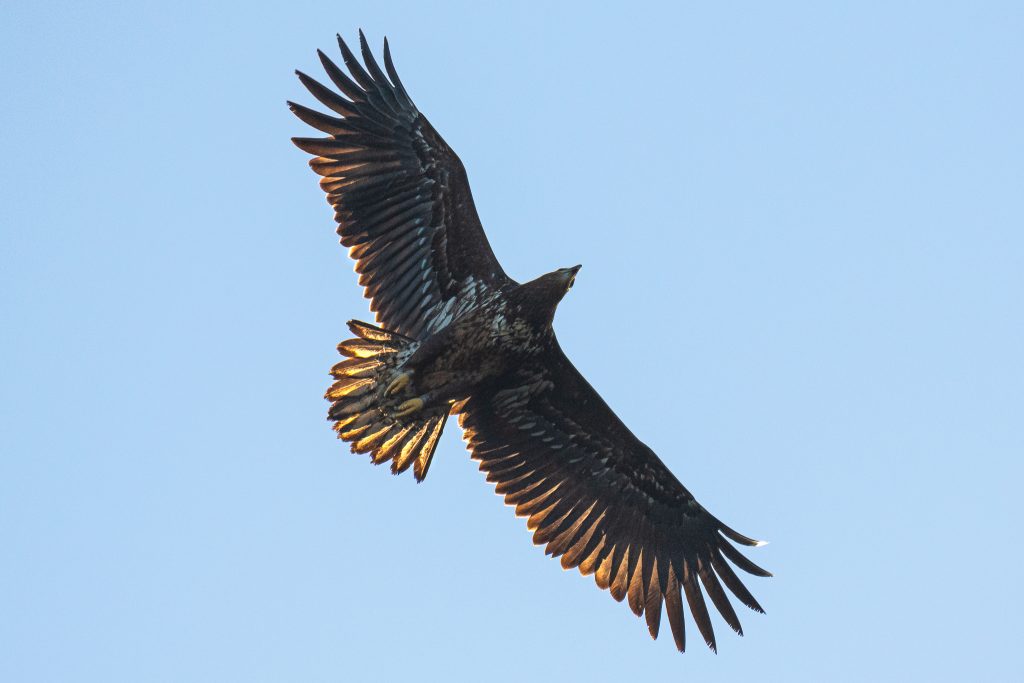 Steve grew up on the Isle of Wight and it’s where he’s worked for most of his adult life. He first saw a white-tailed eagle in Skye two years ago and felt they should be in southern England and it is where they belong. We’re working closely with Forestry England and the Roy Dennis Wildlife Foundation to get the eagles across to the Island and monitor their progress. Here we learn more about the project to reintroduce the eagles to the Isle of Wight.

240 years ago, the last breeding pair of white-tailed sea eagles abandoned their precarious home on Culver Cliff near Sandown.

These birds, now one of the rarest breeds in the UK, were once widespread along the coast of southern England, but were previously eradicated by hunting.  Now Forestry England and the Roy Dennis Wildlife Foundation, working with many conservation partners in England and Scotland, have initiated a programme of reintroduction starting here on the Isle of Wight.
The objective is to establish a viable population of white-tailed eagles that perhaps one day can link up with their cousins living in Scotland, Ireland and those on the north coast of Europe.

The Island’s stunning coastline, which combines white chalk and sandstone cliffs with numerous shallow river estuaries, was seen as the ideal location. Being the last home in the south of England for these great creatures surely sealed the deal. Six young eagles were released on the Isle of Wight in August last year.

Where can you see white-tailed eagles?

In order to minimise disturbance to the young eagles whilst they settle in, the precise location of the birds’ release is still a closely guarded secret. However, they have been spotted many times soaring over many parts of the Island. All of the birds have been fitted with tracking devices which show that they have flown far afield, as well as extensively exploring the Island. If you do think that you have spotted one, but are not sure, then it’s likely that you have seen a more common buzzard.

When you do see one, they are pretty distinctive. Although as youngsters they don’t yet have the signature white tail, their wings are truly enormous, with a span of almost 2.5 metres, making them Britain’s biggest bird of prey. They have a huge yellow beak and are affectionately called the ‘flying barn door’ in bird watching circles.

Their wings are truly enormous, with a span of almost 2.5 metres, making them Britain’s biggest bird of prey. They have a huge yellow beak and are affectionately called the ‘flying barn door’ in bird watching circles.

More birds are due to be released this summer and for the following three summers after that. There is permission for a maximum of up to 60 birds which could be released in total.

This doesn’t mean that the Island will be overrun by these sea eagles. Reintroducing a lost species like this is complex and it will be viewed as a success by the team if they are able to establish around six to eight breeding pairs in the long-term. White-tailed eagles don’t breed until they are five or six years old, so by the time the last birds have been released, it’s hoped that some of the original eagles may be close to producing young of their own.

Steve will return in the autumn to give us an update on the progress but in the meantime, while out and about on the Isle of Wight, remember to keep one eye on the sky and see if you can spot a white-tailed eagle.