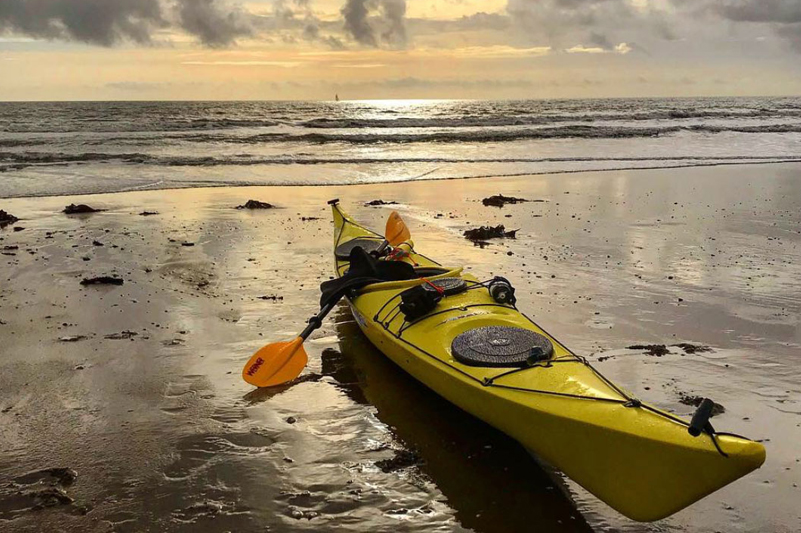 What Is It Like To Kayak Around The Isle Of Wight?

The waters around the Isle of Wight are the ideal place for kayaking in the Autumn— full of interesting creeks and bays to explore and teeming with wildlife. After paddling non-stop around the Island on his charity #KayakRTI challenge in July 2019, regular Wightlink Blog contributor Tim Wiggins provides his view on highlights from around the coast…

The Isle of Wight has an incredibly diverse and magical coastline; from the white chalk cliffs of Culver and The Needles, to the sand banks of Ryde, and the estuaries of Wootton, Newtown, and Yarmouth. I have grown up exploring these areas on foot, and in sailboats, but my new found love of kayaking has let me see a whole new angle on the Island’s coastline.

Having cycled and sailed around the Island more times than I can count, the idea of doing a circumnavigation by kayak was an obvious bucket list addition. The 92 kilometre distance is a marathon challenge by any kayaking standards though, and would be a test for both body and mind. Always keen to test myself though, I set it as one of my ambitions for 2019, and began training in the depths of winter; exploring the coast from the tiny seat of a sea kayak.

As the summer approached, I set a date when the tides worked to complete the clockwise circumnavigation. I also committed myself to the challenge by pledging to raise funds for the great local Isle of Wight charity The Ellen MacArthur Cancer Trust — who take children and young adults that have survived cancer on rejuvenating sailing trips, to help to build their confidence and mental strength. This #KayakRTI mission would require plenty of mental fortitude and water-based endeavour, so the EMC Trust was the perfect partner for the challenge.

The #KayakRTI was a beautiful experience. You can read more about it on The Expedition Journals, and it was incredible to see the support from local Isle of Wight businesses, friends, and family. The day also provided me with a whole new perspective on the Isle of Wight, and it is that kayaker’s experience that I would like to pass on in four segmented sections of the journey…

#KayakRTI started and finished at Bembridge, which meant the first section of coastline was from Culver Down, across Sandown Bay, and then around Dunnose Point to Ventnor. This south east coast of the Island is one area I had explored well ahead of the day, but it is still one of my favourite parts of the Isle of Wight’s perimeter.

In the prevailing westerly winds, Sandown Bay is a calm and peaceful section of the coast; with its sandy beaches stretching from Yaverland to Shanklin, and providing the perfect launching point for a kayak. The tidal flows close inshore are also relatively weak, allowing for safe paddling for beginners and intermediates.

For the more adventurous, heading south round Dunnose Point towards Ventnor provides a whole new landscape; with tall mud-stone cliffs and a rocky coastline. The tide is often significantly stronger here, and the shelving of the sea floor can kick up some sizeable waves; for those with experience though, it is a quiet and beautiful section of coastline that continues on past Ventnor to St Catherine’s Lighthouse.

The south west coastline of the Isle of Wight is its most famous — thanks to the Military Road, Blackgang Chine, and the surfing paradise of Compton Bay. For kayakers, the most exposed section of coastline is also an exceptional place to explore.

Venturing onto the south west coast should not be done lightly. On the #KayakRTI it was a Force 4 north westerly wind, and that was enough to kick up some notable waves; with a stronger south westerly breeze this coastline would be sensibly out of bounds for most kayakers.

If conditions are favourable though, heading out by kayak along the bays of Compton, Brighstone and Whale Chine, offers an amazing exploration. We were lucky enough to spot dolphins on this section of the #KayakRTI, as well as some great birdlife.

Further west along the south west coast you have Freshwater Bay, and around the corner Scratchell’s Bay and The Needles. These are undoubtedly highlights for anyone kayaking around the Isle of Wight; with their amazing towering cliffs, the lighthouse, and the crashing waves. Please do take care here though, and consider having an instructor along from Isle of Wight Adventure Activities, to keep you safe around the numerous rocks and wrecks that pepper this section.

When I turned the corner at The Needles on the #KayakRTI, I was half way round. It also meant I had wind and tide with me for the majority of the journey back down the length of the Solent. If you are exploring Alum Bay, Colwell Bay, and Yarmouth by kayak, then you will be treated to a stunning perspective on the Island; but be cautious of the tide rips through Hurst Narrows, and the strong flows just off the beach at Yarmouth.

Once you are past Yarmouth, the coastal scenery changes significantly again; with Bouldner Forest and Newtown Creek offering a vastly different kind of coast to the cliffs and sandy bays around the back of the Wight. If you have time, venture into the Newtown Estuary and you will discover some beautiful birdlife and natural salt pans.

The section of water just off Cowes is busy with traffic and sailing racing, so I do not suggest making that a destination to kayak; however, venture around the corner into Osborne Bay and Wootton Creek, and you have interesting sheltered waters to explore.

The area of Ryde Sands and down to Puckpool and Seaview is also a fantastic place to paddle; with the shallow waters providing relative safety and low tidal cross-flows.

Around the corner is the final highlight of the Island’s coastline, as seen on the #KayakRTI — the three bays of Seagrove, Priory, and St Helens. These three east-facing sandy beaches are perfect protected paddling grounds, and ideal launching sites.

The #KayakRTI (https://www.theexpeditionjournals.com/2019/07/kayak-rti-non-stop-around-isle-of-wight.html) was a truly incredible adventure; from the calm waters of Sandown Bay, to the rough seas off St Catherine’s; then onwards past the dolphins and bays of the south west coast to the towering rocks of The Needles. The Solent also provides a protected and diverse paddling destination; with estuaries and bays that are just beckoning to be explored.

Circumnavigating the Island in just 12 hours was a great challenge and a whirlwind tour of this mixed and marvellous scenery; I recommend you take a little longer if possible, and really enjoy the amazing coastline of the Isle of Wight.