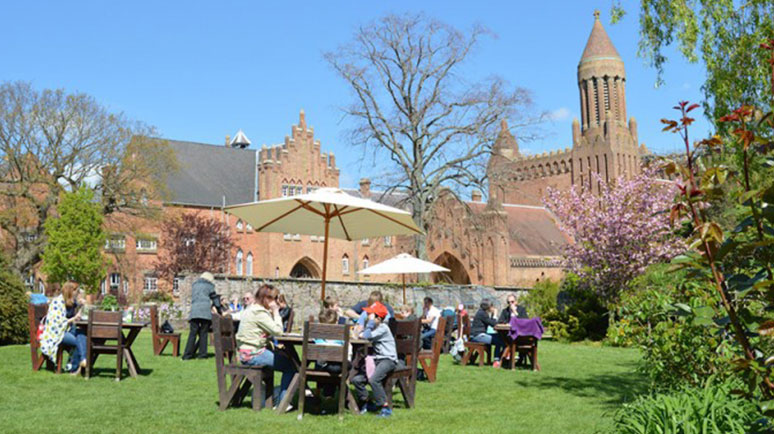 Quarr Abbey is one of the Isle of Wight’s most stunning and spiritual places. This Grade I listed building is a significant example of religious architecture and home to an order of Benedictine monks, who live a peaceful life of prayer, contemplation, and brotherhood.

With free entry to the grounds, there is a lot for the public to enjoy at Quarr Abbey. Visitors can drink in the tranquillity of the church, wander the grounds, peruse the bookshop and indulge in some excellent refreshments from the Quarr Abbey café. There are also a lot of local crafts and wares to be found here, including a charming gallery of local art.

Quarr Abbey was founded in 1132, by the Cistercian order. It thrived for over four centuries, but was ultimately a victim of Henry VIII’s Dissolution of the Monasteries. The site languished for another 400 years. In 1902, a French Benedictine order arrived, seeking solace from new French laws banning religious orders. They quickly established a kitchen garden, began to keep chickens and set to work building themselves a new abbey.

The abbey we see today was designed by a Quarr Abbey monk and raised entirely by workers from the Isle of Wight – an astonishing feat, given that the islanders were at that time used only to building single-story homes. Red brick was brought in from Flanders and the building itself is a work of astonishing beauty, combining Belgian, Moorish, and Byzantine elements. In 2012, Quarr Abbey gained a place on the World Monument Fund’s list of precious and endangered buildings.

As this is a living monastery, not all areas of the building are open to the public. However, the visitor centre, gift shop, tea rooms, and other public facilities are open seven days a week (with the exception of Good Friday). Summer opening hours are 10am until 5pm, or 11am to 5pm on Sundays. During the winter, the Abbey opens from 10am until 4pm Monday-Saturday, and from 11.15am until 4pm on Sundays. Depending on the community’s schedule, the church may at times be closed for monastic prayer.

There’s plenty to see and do here. Apart from enjoying the atmosphere of the beautiful church and gardens, there is the Quarr Abbey Art Gallery, a well stocked gift shop, a farm shop selling local produce and delicacies (including Quarr Abbey Ale), and a wonderful tearoom. The tearoom is located in the Abbey’s walled garden and offers a mouthwatering selection of lovingly prepared foods and drinks.

Getting to Quarr Abbey on the Isle of Wight

The abbey is only three miles from Ryde. Our FastCat service can get foot passengers from Portsmouth to Ryde in a mere 22 minutes. From there, it is easy to reach Quarr Abbey. Book your ferry today, for a lovely, peaceful day out on the Isle of Wight.