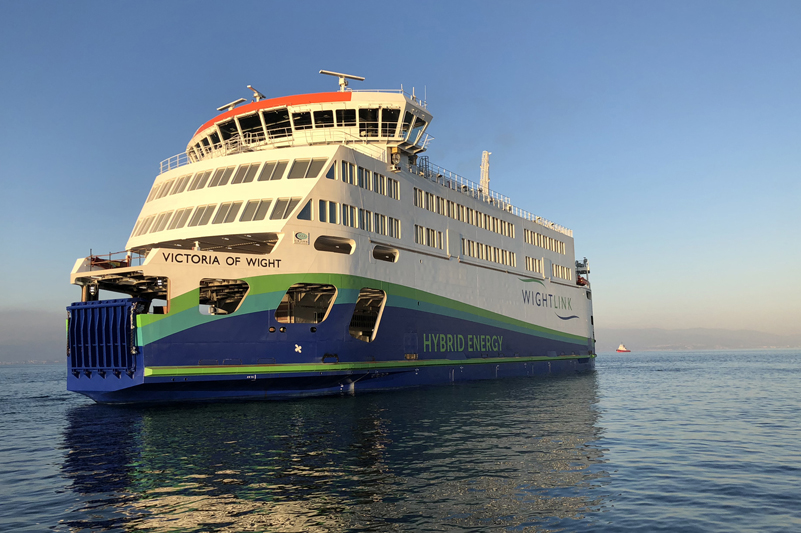 Wightlink’s new flagship Victoria of Wight, part of the company’s £45million investment in the Portsmouth-Fishbourne route, has impressed senior managers, captains and engineers during her first sea trials in the Sea of Marmara.

The ship has completed three days sailing with staff from the Cemre shipyard in Yalova, Turkey, a Lloyds Register surveyor, numerous specialist engineers and Wightlink representatives on board.

They have been testing all essential systems, including the hybrid power drive, and have been completing full speed trials, manoeuvring and turns. One of the ship’s four marine evacuation systems has been successfully deployed and most of the crew on board used the inflatable slide to enter the life rafts as a drill. The drencher system which covers both the lower and upper car decks has been tested and sprayed a huge quantity of water on the decks.

Before Victoria of Wight can start her long journey to Portsmouth, she will be surveyed by the Maritime and Coastguard Agency (MCA) who are based in Southampton. Wightlink Project Director John Burrows will formally take delivery of the vessel at the end of June and she will then be towed to her home port of Portsmouth. Following her arrival in the Solent, her crew will undertake a rigorous period of training before she enters service and joins Wightlink’s fleet towards the end of the summer.

Captain Tom Vincent says: “Mike and I have both handled the ship, getting the chance to try various essential manoeuvres during the sea trials. She handles extremely well with the hybrid system and four Voith Schneider propellers providing ample power. We look forward to her arrival in the UK so we can begin the training of our fellow Masters and crews ready to provide a new era of service for our customers.”

“After many years of planning and hard work, our £45 million investment in Wightlink’s Portsmouth-Fishbourne route is reaching its conclusion,” says Project Director John Burrows. “Our environmentally friendly flagship Victoria of Wight will set new standards for comfort in our fleet.”

Wightlink Chief Executive Keith Greenfield adds: “This is a very exciting time for everyone at Wightlink and for the Isle of Wight as our new flagship, Victoria of Wight, performs her sea trials.   We look forward to welcoming her to her new home this summer and giving everyone the chance to experience the best in cross Solent ferry travel.”

*As Victoria of Wight has specifically been designed to operate to and from the Isle of Wight and no crew are required to sleep onboard she will be towed to Portsmouth instead of making the journey using her own power as the ship has no cabins or facilities to allow crew to live onboard.